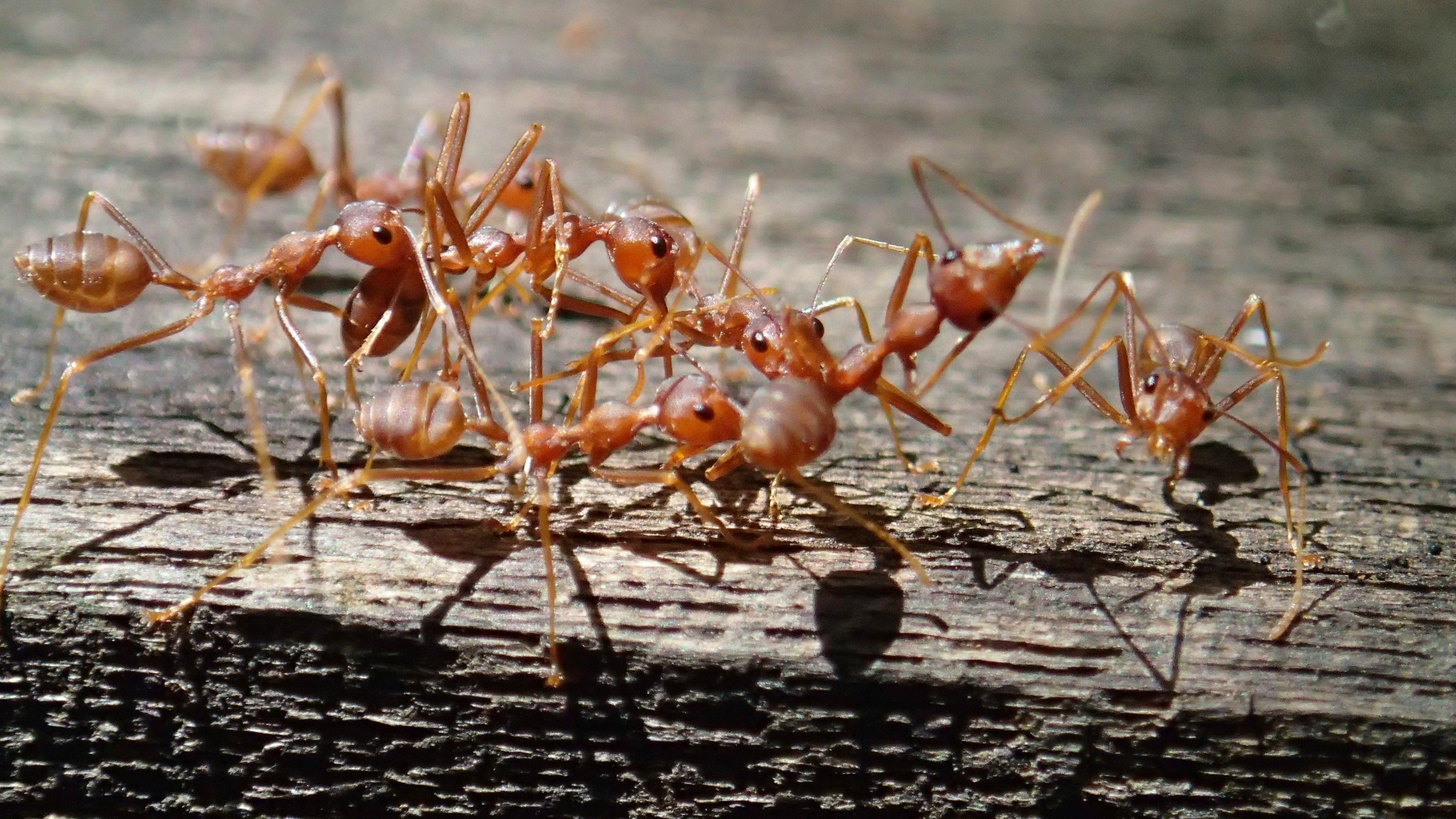 This week I read a really interesting article by Joe Dramiga about how we can model social media trends in a similar way to how we might model ants, as they leave their pheromone trails. You Inner Ant: How Popularity on the Web Arises by Trial and Error makes an analogy between the trail-laying and trail-following behaviour of ants foraging for food, and the link-laying and link-following behaviours of human beings browsing the web. I can surely see the similarities: ants move randomly away from their nests, while laying a pheromone trail. When they find food they return to the nest and then use their own trail again to get back to the food, reinforcing the trail. Other ants that stumble across this trail will follow it, and reinforce the trail even more. Soon this trail will be stronger than any other trail and so most of the ants in the vicinity will use it until the food source is used up. In humans, a lucky person will be the first to discover some cool new website, or start following a really interesting new twitter user. They will leave an 'internet trail' of links and social media posts that are followed by others, who in turn reinforce the trail by leaving their own links and posts pointing to the same 'internet food' source. Really cool idea!

The idea breaks down somewhat with the discussion of how this leads ants to find the 'shortest path'. According to the article, the first ant to find the food has the trail that is the most likely to become popular (because it has had more time to be found and reinforced), and the first ant to find the food must also have taken the shortest path (because she got their first), meaning that the most popular trail should also be the shortest trail most of the time. Side-track: However, this only actually guarantees the shortest path out of all the paths that were tried within some time-frame. An ant that took a shorter path but left later than than another ant with a more convoluted path may be too late for her path to 'catch-on'. In other words, a 'priority + positive feedback' effect has caused a sub-optimal path to become popular! If a certain proportion of ants leave the trail they are on to explore side-paths, this would eventually refine the path to the shortest path. Likewise, if another trail is substantially shorter, the amount of time to move up and down it is shorter, and thus will be reinforced more frequently, leading it to eventually overtake the first trail in strength. I assume some of this does happen with ants (I don't know the ant literature that well!), and that the article was just trying to keep it simple by not discussing this. In any case, it is unclear how 'shortest path' applies to the social media example because generally people who lay down an 'internet trail' simply lay down a direct link to the 'internet food' without reproducing their potentially convoluted trail to get there.

Are there Hipster Ants?

I would also say, the ants presumably use trail-laying and trail-following at least in part because natural selection has "discovered" that this is an efficient approach for maximizing the benefit to the whole ant colony. In the social media example, it is not clear to whom this behaviour is beneficial, if it even is beneficial. It certainly hasn't emerged because it is beneficial to society at large. Because of this, there is no reason, once it has found a food-source or a trail to one, why an ant would want to abandon that food source until it is used up. On the other hand, there are people who will actually avoid following a trail because it is being used a lot---the opposite of the ants general behaviour. It makes me wonder if their are, in fact, a kind of hipster ant, which avoids strong trails in favour of forging their own. I could see how a few ants that did this in a colony might make the whole colony better. Maybe someone who knows something about ants could enlighten me on this?

For this reason I am not sure if the article's suggestion that human social media data can be used to help understand ant social behaviour will pan out. But I would love to be proved wrong, because that is some cool 'internet food' for thought. Please follow the internet trail I've just laid down and check out You Inner Ant: How Popularity on the Web Arises by Trial and Error.

Some more Wednesday Hyperlinks Of My Preference

This is an absolutely amazing timelapse video of corals going about their inscrutable and beautiful business.

Here is my animated GIF which I have also titled "Slow Life" or "Snail on a Cycad: That's Pretty Slow"

I am a bit late to discover this but I thought it was cool nonetheless. Phylo (Kawrykow et al. 2012) is an online puzzle game in which the goal is to align sequences of coloured 'bricks' in different rows together into columns so that they match as closely as possible. This sounds like your generic 'tetris-style' (or even better 'puyo-puyo'-style!) puzzle game so far, but what is cool is that this game-playing is fueling the search for better phylogenies. Because it turns out that alignment of DNA sequences is still more accurate when done by eye than by the most advanced computer algorithms. That's right the coloured bricks actually represent DNA base-pairs and the sequences you receive in the game are from actual organisms! When you play this game, you become a node in a distributed massive parallel computer, made up of human minds. And, the craziest part is: this game is actually fun!

Warning: This game could be particularly dangerous for biologists who are prone to distraction, such as myself. I call this a 'wolf in sheep's clothing', because it is too easy for me to justify playing this game as a biologist---after all, it is sequence alignment. I have to align sequences all the time, surely this is just good practice? And this is contributing to science, and, as a scientist, I therefore would be doing my job by playing this game. In fact, if I didn't play this game, surely that would be a disservice to science! And so on. So for those of you who feel the allure of the Dark Playground, be careful with this.

The only issue which might make it less fun as time goes on is that it is possible to get stuck on an impossible level. Because the game uses real unaligned sequences, there is no way for the game to know what the highest possible alignment score is. Therefore, sometimes the score required to get to the next level is higher than is actually possible.

Check out the paper describing it:

In this post I am going to look at how we can run fairly simple simulations in R with high efficiency. Though many individual-based simulation models might be simple, they can still take ages to run in R because of it is an interpreted language. In particular loops are notoriously
It used to be that I would make all my figures in black and white. It was just simpler that way, since most print journals charged extra money to print colour figures, and I did not have any money to spare. But with the move in science publishing from mainly
I have been experimenting recently with using my relatively inexpensive camera to capture the feeling or sense of a place I am in, with an eye towards collecting a record of field sites in my ecological work. The key is for it to be more immersive than a simple photograph,